Replacing Juzam in monoblack. How do alternatives add up?

It's not debate, that stat wise, Juzam is the mid-range beater in the format. With immunity to Bolt, Blast, Terror, and being a 5/5 for 4 with a realistically minor drawback, it's no wonder it's considered one of the most iconic creatures of the era.

However, due to a lack of availability and some less the savory issues with the game at the moment, it's realistically out of ones price range, which means one must come with an alternative, mainly for the Mono-black. Well I'm here to solve this for you!

Each card will start with a score of 5. I will then add a +1 for each advantage that card offers (evasion, cheaper or same CMC, durability), then reduce a point for it's weaknesses, for instance a card will lose a point for each mana it costs more then Juzam, each point weaker then then power (-.5) for each toughness, ect. 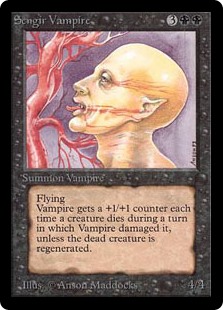 Sengir is the most often said replacement for Juzam, both because it's iconic, and because it's powerful in its own right. With evasion, and a ability that discourages Alpha Strikes/Chump Blocks, it's understanble why it's cited so much.

At 4.5/5, this is a pretty good score, however, the additional point in no mana, and the reduction in p/t makes the difference. Plus, many could argue, while not strictly inferior, he plays different then Juzam.

Like many card, Juggernaut is a card that saw much fanfare in the early years of the game, but has since fallen out of popularity. Still a modestly powerful card in it's own right, even if it's weaknesses show.

At 3/5, on the score, Juggernaut is a lack luster alternative, but it's cheap, both in CMC and in dollars (even in Swiss if you go for white border). 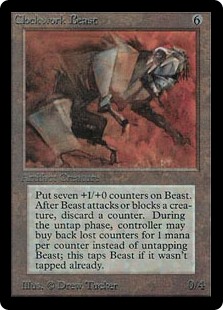 Another popular creature from the 'good ol' days', Clockwork Beast only fits into this slot due to the fact it's colorless, realistically able to come out as soon turn 2-3 (about the same as Juzam).

In reality, it's drawback is minor, due to it swings for 11 before being even w/ Juzam. However, it does get progressively weaker, and it's ability can be very costly in the late game, however, I'm judging it as a minor drawback.

In reality, this guy does hit hard, and with the ability to resist Abyss is just bonus points. However, it's 6 CMC, it's dewinding drawback, and it's lack of evasion keeps it from being amazing, but at 4/5, certainly an interesting proposal.

Clockwork Beast was so popular that it got a spiritual sequel in Antiquities, called Clockwork Avian. A flying 4/4 for 5 (then weaker).

At 4/5, it's on par w/ the Beast, and while swinging for less, it's evasion makes it a bit more consistent then it's older brother. 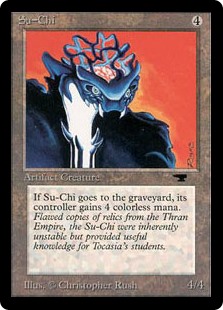 Often the replacement to Juggernaut in the modern time, due to it's little drawback that isn't relevant in this time period.

6/5, it's an amazing contender. While not Juzam, it makes a good contender for second place (with Sengir)

The black sheep of this family, Fallen  Angel is often better when built around, but it does have benefits.

Fallen Angel isn't a straight replacement to the big J, but she's solid when built around. Unfortunately when not built around, she's rather lack luster, though being able to pump her up to swing lethal is nice.

One of the few rarities that in theory it can come out bigger then Juzam, even if unlikely. It also has the draw back of paying life upon cast, which can be more disasterous then losing life on upkeep. However, if being used in the board against mono-white, can ultimately be very powerful indeed. Plus Trample is always nice.

Fun Fact: This creature currently has no creature type.
No Score (due to variance)

Derelor
Probably the weakest on this list, Derelor unlike some of these guys actually saw major tournament play in 96 in a deck called 5 color sligh (where a set of twins of this saw play as the only black card in the deck).

At 3.5, he's the weakest choice on the list, but also one of the most cheapest to actually own.  Again, his draw back is severe (as someone who's actually run him in decks), but at a 4/4 for 4, he's not all that bad. I can understand why he'd see play in a 5 color deck.

The last creature on my list (sorry Dread Wight), Ihsan's the quintessential 95 black legend in my mind. With a combination of durability, strength, and awesome flavor, who doesn't like Magic's own fallen Paladin.

According to my math, Ihsan gets a 'perfect' score of 5/5. However, I feel, he's not perfect, and as such, I decided to save the best for last using the "5/5" system.

A card that needs no introduction, Big J himself.

In reality Juzam got 7/5, which means this grading system isn't amazing, is it?

Well, that it, and it took me way to long to type this out, but if you have a request of something I accidently (or deliberately) missed, send me a message on here, write on the inevitable twitter thread, or send me a message, and I'll add it in the sequel article. I also hope, this inspires you not to spend a few grand on a set of this badass.
Posted by Gunnarson's Bag at 3:54 PM No comments:

"Twiddle doesn't see play because you touch yourself at night"-Gary J Steffen Jr.


Cards with multiple forms I call modular cards (not to be confused with the Mirrodin Block mechanic). Before the charms existed, cards with a wide variety of use and versatility was actually kind of rare. No one Bolt's there Fungusaur to give it +1/+1, it's almost always used offensively. The same could be said for Swords, though I at least seen that used to keep someone alive before (against creature less burn).

Twiddle is one such card, it's a simple, deceptively complicated card, that has almost infinite applications, much like the Swiss Army Knife I compare it to.

I will get lots of flack, when I dare say, Twiddle is the most underrated card in the entire format. It's name, which means to change something minor, or to fiddle with something pointlessly, does exactly that. This card does exactly that, which for the cheap price of a blue, taps or untaps and artifact creature or land.

Here is a list of the things Twiddle can be used, both offensively and defensively.

Tap down a would be attacker/blocker (especially Colossus of Sardia)
Tempo disadvantage from tapping a land during the upkeep
Tapping down a 'cost rock' like Vault or Monolith
Untapping a value land, such as Tron/Workshop
An Extra Draw off of Library
Makes Factory a 4/4 defender for one turn
Untapping a Time Vault (the best use)
Getting a second creature off Rubinia/Sea Singer


It also synergizes with the following cards really well:
Siren's Call/Nettling Imp
Paralyze
Sirens Call
Disc (allowing you to use it in a pinch)
Royal Assassin

Sure time hasn't been as good as it use to be, you can no longer fog a blocking creature with it, and it doesn't turn off every artifact anymore. However, I feel it's still absurd that it doesn't see any play.

The art of Alexander is always breath taken. This is no exception. It's pretty amazing, however the best part is the debate on what is going on. Is the Island tapped down, out of mana, or is it the jellyfish? Is the Jellyfish simply being untapped? It's the perfect art for such a metaphysical effect.

Flavor: The idea that it's a 'small change' works well with what it does. It does something extremely minor, changing the state of a permanent, but it's such an important and amazing effect. I'd dare say, this card views what magic was intended to be, a card of small effect with numerous application.


Conclusion: I hope you all try out this gem, whether it's in casual brews or tournament uses. I promise, you won't regret it.


Posted by Gunnarson's Bag at 5:17 PM No comments: