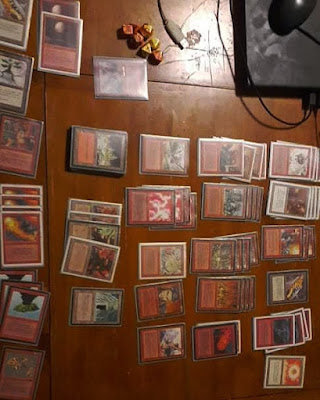 One of the most influential deck principles of all time, Sligh is the grand daddy of every other variant of Red aggro and burn ever made. From the humble Goblins beat down and Red Deck Wins, to the more complicated ideas like Virtual Card Advantage and Big Red, all red decks, and maybe all aggro decks owe its existence to this simple formula.

So as anyone knows that follows me knows I've built this deck before, in fact I build it alot. Why build it again?

Because at the end of the day it's fun! I enjoy playing red, and I really love Balduvian Horde. Which will be mentioned below.

The deck did surprisingly well for what it was, and managed to push most decks to a third game. Despite this, I only got two wins, with one game being due to forfeit.

Still, the games in their own right were fun. I faced a multitude of aggro and midrange decks in their own right, each one running some variant of blue. Naturally of course. You really can't overcome the blue card advantage. Which was probably the biggest weakness in the deck.

I can't believe how much this card has been shit on in it's time. While the drawback can at times be detrimental, in mono red burn it's almost negligible.
Then you get a literal red Juzam Djinn. It's easy to see why this was the chase card for Alliances, and why its art was used for so many promotional material back in the mid 90's.
Speaking of Red versions of other things...
Rogue Skycaptain 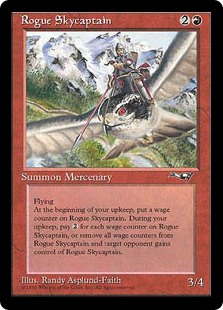 A red Serendib Efreet with a more expensive, but less painful drawback. What originally was the replacement for the foil Horde turned out to be a great creature in it's own right, and I'm glad it did. I never once had it change control. 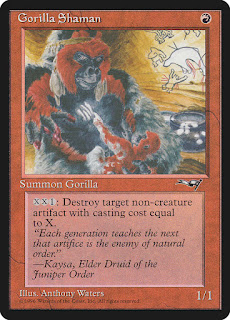 The cutest tournament staple, mox monkey is a force to be reckoned with, and might be the strongest creature in Alliances. Every deck I faced even splashing red ran him. Anything else I can say about him has been said elsewhere already. 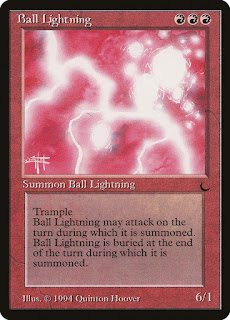 Nothing new here. I just want to say how pleased I am at Ball Lightning's performance. 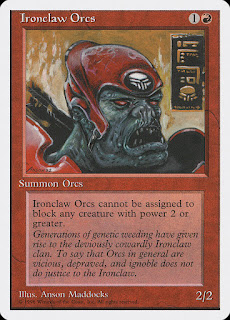 There is alot of people that would claim I lost my mind on this. After all, he was the original sligh deck, and he has the coveted gold border treatment. I just feel better options exist then him. Dwarven Soldier could synergize with Dwarven Lt. Varchild's War-Riders are much bigger. It's not Ironclaws are bad, as much as they are simply not good. Everytime I played them, they were fine, but honestly did very little outside a turn 2 drop. 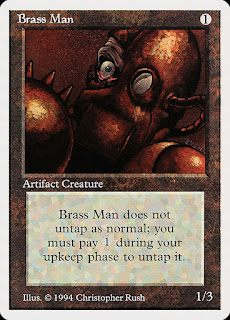 Another addition from the original sligh deck. Brass Man is best when paired against another weenie deck. However against anything else, he was a lack luster inclusion. One damage for 1 mana each turn was a serious issue in the early game. Just like the Orcs, his crime wasn't that he was bad as much as he simply wasn't good. I honestly wonder if Orcish Conscripts or Goblin Sapper would have been a better choice. 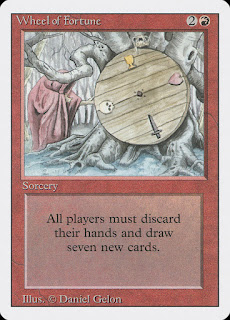 I don't think I ever casted my own Wheel once, and any time my opponent casted Wheel or Twister, I won. Its honestly making me question the wisdom of running it in burn. 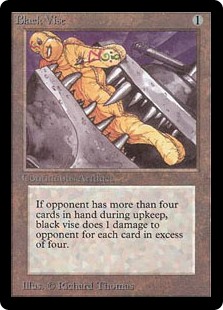 The one of was me not entirely being sure of the legality of it in the format. Better safe then sorry, but had I known, I would have run 4.

Conclusion: The deck went 2-4, while also losing a bonus game played with someone in my pod. Like a universal problem with burn, it can run out of gas before it can secure the late game.

While all the games were hands down fun in their own right, it is admittedly rather lackluster playing the same deck with different skins like that.

It has however inspire another deck idea I currently have, that hopefully will go over better.