"Fight my enemies LORD! Attack my attackers! Shield me and help me."

Cleanse is paradoxically one of the easiest ones to understand why it's banned, as well as one of the strangest. After all, assuming Teferi doesn't count as a black creature, race and the color of a creature are entirely different aspects. Colors in Magic are more of a philosophical aspect of ones self then anything to do with race, with a few fantastical exceptions. 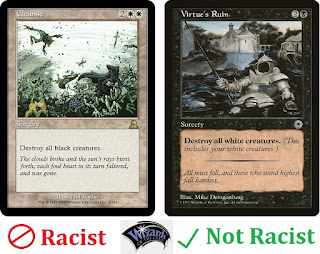 Cleanse as a card represents the destruction of evil, a common and long standing fantasy trope. However some have the argument for the card it represents 'racial cleansing'. Then I ask, will Cleanse kill Teferi without Deathlace? Does Northern Paladin represent the evil of Klansmen? Does Extiction represent Genocide?

What about Virtue's Ruin, or Cleansing, or fucking Mass Calcify. What about the Burning of Xinye, isn't that equally culturally insensitive? The answer is obviously no.

What I'm saying this is obviously a non-issue thats being used as a scapegoat, even more so then other cards on the list. It's harmless, and the fact I'm writing this article is ridiculous. It also sets up a dangerous precedent. What is keeping the card above from being banned? Or the ones listed? I could fill out an entire list of cards that could fall under these guidelines.
Playability: Cleanse, like most color hosier destroy effects is a pure sideboard card. A potentially one sided Wrath of God is good in certain situations, and given how popular black decks were (and are) in the format, it certainly has it's niche. It can also be run in a Chess deck along side Touch of Evil to destroy numerous of your opponents creatures. While its a nice sideboard card, and in certain types of decks, an interesting card in others, that is it. Playability 3/5. 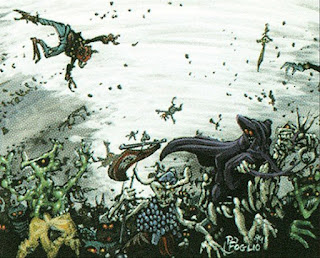 Art: Foglio does an amazing job with his very distinct art style on this piece. The art clearly shows numerous demons, each one different from the last, being sucked into a righteous  light. His cartoony style works well for the panic in the demons eyes and body language, and the liberal use of washed out colors make for a good show on the light itself. Then you have the leader, his throne of bone, and the flag. All nice little touches. Honestly I think the faded look of English Legends cards did this piece no justice, and I always run my lone Italian one when I throw it in a deck. Art 5/5.
PS. I'm still convinced that is the Disturbed Guy.
Flavor: As a common fantasy trope, Cleanse simply destroys all evil. It's far from the only card like it in the format (thinking of Holy Light), or the game. While I wish it destroyed all Black permanents, fitting the cleansing aspect better, the card actually follows the art well. Destroying all creatures, and only creatures are being destroyed in the process. In this regard, I give the card a solid 4 on flavor, for matching the art with the card in functionality. 4/5.

12/15= 4/5. A solid card that would look good in a pack and has a 'wow' factor at first glance. The art helps leave a mark on the memory, and all around, a solid card.

Impact on the format if banned: While I personally always run 1 in my mono-white sideboards, it's use is limited. In fact, between WoG, Balance, Moat, and even StP, white just has better options in it's arsenal. The theoretical impact of its ban would be a 2/5.

Posted by Gunnarson's Bag at 12:53 PM No comments:

"A mysterious people indeed. Their origins are as secret as their traditions" 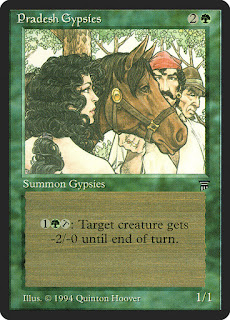 Out of all the cards that got banned, this one was the most personal. Me and my twin had been making jokes and, ironically as the kids would say it, running Pradesh Gypsies in green decks for almost as long as we've played Magic. His mono-green deck, which is currently in my possession even has a Legends copy I bought for him YEARS ago tucked in their, waiting to give that creature -2/-0. How you might ask? Well, I'll get to that later.

Now I love strange cards that represent underwhelming or mundane things. Field of Flowers, Slate Street Roughian, Icatian Money Changer. All amazing in their 'huh' ways. Imagine how useful a field of flowers is to a sociopath wizard able to summon dragons.

Pradesh Gypsies is probably one of the strangest green creatures in all of Magic. It's play ability is almost non-existent, its mechanics is open to debate, both from a mechanical and flavorful aspect, and it's printed type 'summon gypsies', has no tribal support. In reality, the banning is the only reason a majority of players even know about the card. The funniest part is, it isn't a Legends exclusive. It instead was printed all the way until Classic 6th edition. Yeah this card was standard legal until 2001, with that glorious Hoover artwork.

It's my understanding that Gypsies/Gypsy is considered by some to be a derogatory term of the Roma/Romanian people, nomads largely based in Europe, but can also be found in the good ol' US of A. Being a traveling people have giving them an mystique involving the super natural, and it's true that the people in question have a long history of various performances, as well as fortune telling and other mysticism to eek out a living.

I guess, the idea of a real world ethnicity in Magic: the Gathering. However, I've also heard from some, that certain Gypsies, personally the ones that hold that title with some type of badge of honor, that they've been removed from Magic. I can not speak one way or the other on it's banning, but I will say, a Gypsy is a common slang term in the rural US for a vagabond or nomad, with no ethical connotation involved.

Playability: A 1/1 for 3 does not bode well for any card, in any format, ever. Then it has an underwhelming ability to give one creature a -2/-0, at the cost of 1G and tapping it. Even its current creature type has no tribal support in the formats I review. Honestly, it earns a solid 1/5 for playability, which hurts me to say.

Art: Hoover always impresses, and this is no exception. While not his most sophisticated art piece, it's a fine piece none the less. With distinct bold colors. The subjects, three people and a horse, could simply be wandering through the woods, or setting up for a stag film. Whatever it is, it's a fairly unique art piece as far as Magic goes. If there was one complaint, it's the clothing seems a little to contemporary for a fantasy card game. Also there is the old urban legend that the girl is topless, but if you look closely at the piece, in the lower left corner, you can see just a bit of strap, which suggests she's wearing a topless dress. Art 4/5

Flavor: Oh boy, where do I start with this? Well, I guess I'm not stranger to controversial statements, so lets go head long into this. I always assumed, growing up, that the creature you targeted was distracted, to gypsy dances and performances, and got a loss of power. Some European friends have suggested since this cards banning that instead, the gypsies are stealing things. This works, if they are, stealing the sword from your knight (no idea why the Paladin can still punch out tundra wolves though), but not on your opponents Craw Wurm. I assume the two mana is a cost for services rendered regardless of the interpretation. Still, its a strange mechanic, and really doesn't fit into a green creature anyway. 2/5.

Overall 7/15, rounded down, 2/5. While the card is, in its own ways, iconic, and certainly strange, it's also a bad card. Not a card you want from your legends pack, but I'll run it anyway, because I'm bad at this game.

Finally, impact on the format if banned. Literally none, as no one was running this before hand.