"It's the strangest case I've ever seen". Those were the words I heard on my phone at about 3 pm and a dreary Friday Afternoon. His voice, as with many who seek me out, was desperate, and it could be heard even across the landline.

The case, at first, wouldn't turn any heads, three gang bangers dead. However, it was how they were killed that was the cause of concern. The first one, two shots in the chest, apparently from his homie. The homie, in question, was found a few feet away, a snapped neck and a broken arm was what got him for his troubles.

The third one, a Tyrone McGee, had made an attempt to run for it, and got a hundred yards away, according to ballistics, frantically firing behind him, before apparently being cornered, and attempting a fight. It also ended with him being killed, but much less merciful, as his jaw and eye sockets had been shattered, and his chest cavity is apparently collapsed. A knife was also found near the body, but it apparently hadn't even his a mark, as no blood was found on the blade. Forensics had yet to comeback, however.

To all this, my contact said, was one witness, a migrant, who was failed to be picked by the local police. She refused to cooperate with the investigation, and has since disappeared, but was recorded describing the attacker as 'El Diablo'.

"We must have this 'devil' be discovered or disappeared. My bosses are starting to breath down my neck, and it's getting hard to have the local media to remain silent about it, this is the third incident like this, this month, and..."

He goes on like this for sometime. I reassure him, that I'm the best, and the case will be solved soon, and the rate will be worth him not losing his job.

Well, if you are listening to this, you must be wondering, well who am I? After all, something terrible has befell me if this recording is out, well I'm no G-Man or Spook. In fact, some who would fit that description are my toughest cases.

I'm, for the lack of a better word, a private investigator, but I do so much more. When a man receives a vision from God, I make sure it stays a vision. When some heiress is kidnapped, I'm the person that finds who did it, and if needed, make sure she doesn't end up in Africa. When some retired Majestic decides to take something into his own hands, I'm the one that convinces him to retire for good. Every time a child disappears without a trace, there is a pretty good chance someone in my field had something to do with it.

I'm the best, in my opinion, at what I do, and I have the record, and price tag, to prove it. Which is what's so alarming about this. There is a dozens of cheaper options, not to mention agents and detectives, that would do this case considerable cheaper, and just as efficiently, however, not as discreetly.

So why am I recording this, on tape, of all things? Well, something about this doesn't sit right, and I figure this would be a good insurance policy for myself. If this case is a set up, I'll use this with other evidence to bring down those who hired me.

Studying over the dossier that was faxed, I've concluded the suspect isn't ex-military, since his assumed lack of firearm training, nor is he a vigilante, since he left no calling card, as vigilantes tend to do. The other two cases, were just as random, an outlaw biker, and a pedophile, both brought down in surprisingly gruesome ways, which I won't repeat, both apparently by battery, and no evidence of fire fight. Nor any evidence of connection between the various men.

I've set up a rendezvous point between me and a local detective on the case through our mutual third party, early in the morning, and until then, I rest. After that, I shall search for the missing Jane Doe and check out the background of McGee. First day, goodnight.

-End recording-
Posted by Gunnarson's Bag at 12:52 PM No comments:

Narwhals: Inventors of the Shish kabab

"Narwhals, Narwhals.
Swimming in the ocean.
Causing a commotion.
Because they are so awesome"
--Weebl, Narwhals.

Probably one of the most memorable Internet songs of the previous decade, Narwhals have come back into public consciousness thanks to a recent tragedy. Due to my blog being apolitical, and being about Magic, I won't talk about it.

So how well does Narwhal fair on it's own? Well let's find out!

Playability: Narwhal is a 2/2 first strike and pro:red for 4. Since its blue, it automatically gets a point.
While First Strike is good, blue is not famous as a combat color. However, Protection from red is an amazing mechanic, and that immunity to removal. Protection on a blue creature has so much better utility then other colors, thanks to sleight. Plus Chaoslace is nice as well, which could be brewed around with sea sprite.

Utilize with Pyroclasm.
Plus a 2/2 first strike can beat a grizzly bears in a fight. 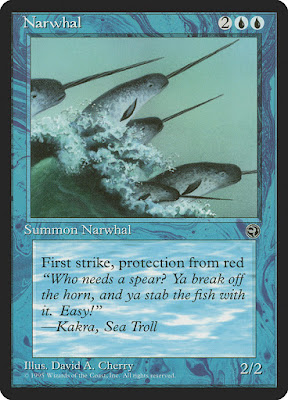 Art: David Cherry art is effective, showing multiple Narwhals trying to move forward, being the Jedi of the sea. The colors really fit the blue card, with the sea green water, and the salty looking sky.

The Narwhals can be more distinct looking, but it works.  Art 3/5.

Flavor:
Narwhals having First Strike makes a lot of sense. However I don't understand why they have Protection from Red. Nor do I understand why such a massive animal is merely a 2/2. However,  I suppose a 3/3 for 4 with two good abilities would have redeemed Homelands to much for the EDT liking.

In conclusion,  2.8/5. A forgettable mediocre rare that is made famous time and time again thanks to things outside of Magic. I wouldn't want it to be any other way.

Posted by Gunnarson's Bag at 3:22 PM No comments:

Take me away on the winds of change. 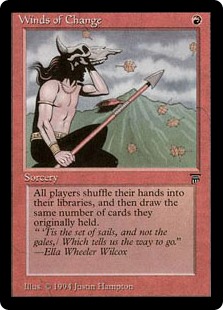 Playability: Coming in a mere R, WoC shuffles in your hand, and draws a new one. However, it doesn't just do it to you! It does it to your opponent as well. This makes playing a first turn Winds one of the most strategically sound plays in the game. I've more then once heard the grunts and moans of a player who mulliganed down to n6, just to be given a hand they are disappointed in, and more importantly, they are stuck with.
The card also can work, as mentioned, in dreams. particularly well after a well played Wheel or Timetwister, just be careful in the mirror match.
I'll give it a playability of 4, because of it's niche.
Art: Is that a cliffedge, a mountain, or the ocean? Depth is not this art pieces friend. While it's certainly memorable, particularly between the sky, the broad use of contrasting color, and the warrior himself, and leaves a strong imprint on the imagination, it isn't without it's flaws. The leaves are a nice touch though.
Art: 3/5.
Flavor: I guess the winds of change can be chaotic, which is why it's red, though the name feels blue.
I guess the idea works on the card itself. In reality, I never got the flavor of this card, and while I've been a long time fan of it, for numerous reasons, I've never really reflected on why it exists. The possibility of the unknown that comes with change?
Either way, it's flavor is just going to be a 3/5.
In conclusion: A niche rare, but a good one none the less. While it's not the BEST card in magic, it certainly fills it's roll, and I'm glad it exists.
3/5. A fine addition to OS Magic.
﻿
Posted by Gunnarson's Bag at 12:24 PM No comments:

When I was asked to replace a person who dropped in the "Duel Commander: event for November, I had decided, after a heated argument, to build Abu Ja'Far. However, a talk about politics isn't alone, the other reason was for none other then I've had an itch to try my hands at White Weenie.

Why? I'm not sure, but it's something I hadn't built in a rather long time, and I always use to like white as a color.  Perhaps the idea of knights and soldiers, storming together and overcoming foes is my reason for this, or perhaps, I'm just bad at Magic, who knows.

Had I realized the starting life total was 30 instead of 20, I might have gone with something more midrange! 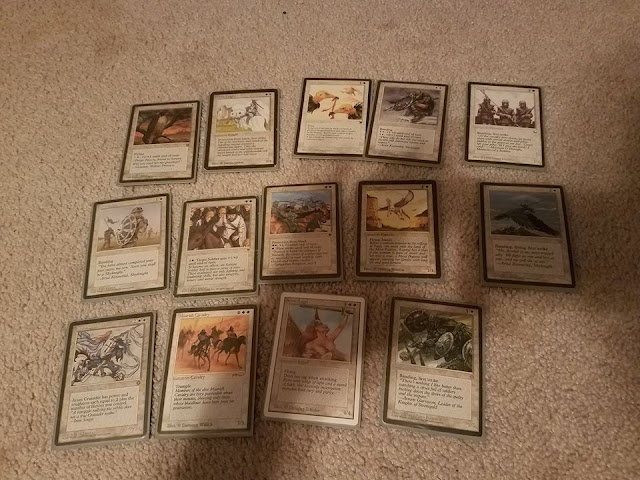 Probably the biggest cost of this, was the lack of artifact creatures. While that will make sense in a second, it was rather a dumb piece of oversight, as the Abyss is very real.
Also, unfortunate, is I couldn't, no matter how hard I tried, find an Order of the White Shield at the last minute (basically I didn't own one). However I did want to utilize as many mana dumps and pump effects as possible, since the late game is often not a lot to do, and lots of mana available, which is why I included Icatian Priest and Kjeldoran Knight.
If only I kept the Trade Caravan, maybe...
Serra Angel and Aysen Crusaders turned out to be big MVP's, with honorable mentions going to Kjeldoran Knight, Icatian Lieutenant, Shield Bearer, and Abu himself.
Pump Effects
What would white be without them? I included every pump effect available in the format besides Angelic Voices (again, don't own one). This included Serra Aviary, which in retrospect, I question, but worked well with the idea of utilizing it as removal, and I once killed the Abyss with it.
﻿
﻿

﻿
Ashnods Transmiggathingy got put into the deck as a anti-terror/abyss tech, as well as a deterent in combat. While Moral and Army of Allah allowed them to utilize more constructive tactics.
Formation and Heal were both included in the deck for it's cantrip abilities (but lightning blow was in another deck).
Death Ward helped me in a pinch more than once, including against a disc at one point.
Finally Blessings was met with much fanfare, but did little, and most games I played it, I felt I put it on the wrong target.
Removal
﻿ 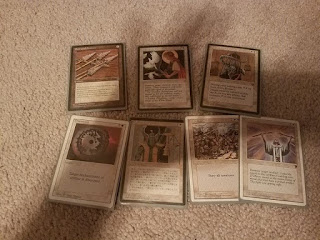 Rather light, which is the biggest issue with the deck. I probably should have included disc, and maybe even Time Bomb into the mix.
In reality consistency is key, and against control, it became a race to see if I could do enough damage before a Moat or Abyss dropped. Against weenie or midrange, it became an issue of having to fight off bigger creatures. Which is where the issue ultimately stemmed from, and why the deck got it's name.
A bunch of small white creatures coming in strong, just to lie flaccid after a good start.
0-6. W/L.﻿
Posted by Gunnarson's Bag at 10:17 AM No comments: