"From my grave to wander I am forced/ Still to seek the Gods' long sever'd link, Still to love the bridegroom I have lost, And the lifeblood of his heart to drink"-- Goethe, The Bridge of Corinth.

Vampires are a classical literature staple of horror, dating all the way back to the 1700's in western literature, though urban legends and folklore arguably go back to time immemorial. It would make sense that the base set, in its attempt to cover every fantasy lore, would have one vampire.

To say Sengir Vampire is a fan favorite is a bit of an understatement. He's still a fairly popular creature even today, both due to nostalgia, and do to the simple fact his ability is cool. Many other vampires have come around since 1993, with many variants on what vampires can do, and many more who can't, but none quiet get the flavor down as well as the original.

The reason I'm writing this, isn't because of the these things, however, but because I been using him this month on my grind to Mythic on Arena. In my opinion, Sengir has aged better then many of his contemporaries. This is due to the somewhat unique wording of his text, counting whenever he deals damage to a creature, not just in combat. Even in Old School there are ways to use this, which I will get into in a little bit. However with the copious amounts of "fight" mechanics printed in red/green these days, Sengir can take out creatures without engaging them in traditional combat, getting that sweet +1/+1 counter before swinging. 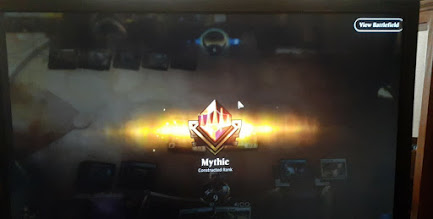 One of my favorite stories involves a card called Chandra's Ignition and Sengir Vampire, which took out 5 other creatures (two of them being my own) to end the game with him swinging in as a 9/9. This was during Shadows over Innistrad standard, and I had made a budget Vampire Deck (which Sengir was in standard thanks to the Welcome Pack/deck).

Playability: In Oldschool, Sengir is the classic enemy of Serra Angel, and while not nearly as iconic or as powerful an enemy as Juzam Djinn, its certainly efficient. A 4/4 flyer can command a great deal of respect, but the ability to discourage chump blockers is where he shines. His unique ability to get stronger as he kills things is what sets him apart from other creatures in the format. In 93/94, several cards can help him kill creatures, my personal favorites being Farrell's Mantle and Arena. Combo Arena with the additional Sorceress Queen for guaranteed victory. In Pre-Modern/Middle School this tactic is increased to include fan favorites like Pandemonium and Triangle of War. You can even use Vhati il-Dale for another take on Sorceress Queen mentioned above. While not competitively viable, its a fun interaction that should be taken advantage of from time to time. Plus, he got special in the Beatdown Boxset where he faced off against his other mortal enemy, Erhnam Djinn.

Outside of this, he's still an effective creature, and one of my favorite replacement to Juzam Djinn. Sure, he's not the best creature in the format, but he's certainly up there, and for that, he gets a solid 4/5.

Art: Man, did Maddocks knock it out of the park with this one. This is tied with Elvish Archers for my favorite art piece by him. Everything from the pale skin, the horrifying teeth, to the vein in the back. The simple use of solid colors is the best part of this card. It's edgy, in a 90's sort of way, but not to edgy, which is what edgy content would eventually become. It's a solid 5/5 art piece. 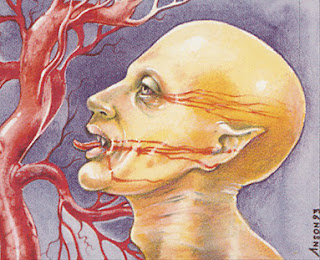 According to accepted legend, the hand of a Sengir Vampire is in the art of Deathgrip as well, establishing the lore that Sengir's can drain lifeforce through their hands in addition to their mouth. This is actually shown in the beatdown art for the card, as mentioned above.

Flavor: It makes flavorful sense that Vampires get stronger over time, as well as them being able to fly. These are well established tropes of the creatures from popular fiction. Sure garlic, the inability to cross moving water, and dropping bags of rice never made it into the card, but who can expect that? As is, he kills things, he gets stronger. Later vampires would just care if they did damage, but I always felt that made less flavorful sense. Why would your vampire get stronger if his prey managed to escape? Vampires flying is a given, and

Flavor: 5/5. The Flavor of Sengir Vampire is simple, but iconic. Its a perfect card in that regard.

So there you have it. A long time favorite creature of mine, and one of the best creatures in the old school format. While it might be simple, it's in its simplicity that it shines.