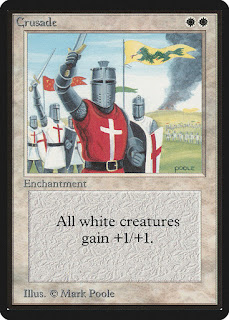 There is something to be said about consistency. When I saw Jihad banned, I immediately looked for Crusade, and to my surprise (and my disgust) Crusade was next to it. I did congratulate Wizards of the Coast for being consistent, banning both cards equally.

I always said both of these cards being in white was probably the greatest unintentional political statement Magic ever did, showing both sides were "good", from a certain perspective. It's one of those early things, that more then likely unintentional by Garfield, showed just how mature of a game Magic actually was. Honestly, Jihad could have easily been printed in Red (desert people), or Black, to show as a contrast or an enemy to Crusade and it wasn't.

So back to Crusade, its actually ironic, and in a way perplexing, that this card was banned. While the argument could be made it's a real world reference. The Crusades were a holy war fought in the Middle Ages against various groups, most infamously the lands of the Middle East, but a Crusade against the Byzantine Empire (with the sacking of Constantinople), and a Northern Crusades/Baltic Crusades, also had happened (not to mention the Children's Crusade). The Mark Poole art depicts one of these, complete with knights bearing crosses, but it's location is intentionally vague. However, like a jihad, a crusade has a second meaning: "to lead or take part in an energetic and organized campaign concerning a social, political, or religious issue."

In this sense, Crusade like Jihad has an entire definition removing it from the violence of the Middle Ages. This makes the argument of it's banning even weaker then it was.

The funny thing is this, Crusade has been reprinted numerous times, and was Standard legal for the entirety of the 90's. In fact, it even got the new border treatment, depicting story line favorite Elspeth Tirel. In fact, it's the only card of the banned 7 to get additional art, as well as the only one to see major tournament play. 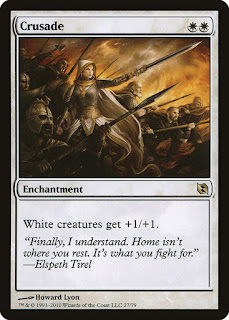 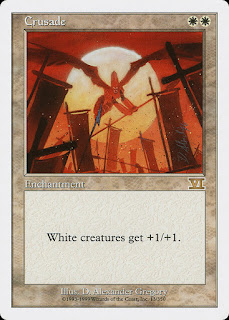 This is why so many people campaigned against this banning. It's iconic of it's era, a common sight in the first decade of the game. It isn't a trivia piece like Invoke Prejudice, or an obscure oddity like Pradesh Gypsies or Stone-Throwing Devils. This is the Ur-Example of an entire archetype that has continued as part of Whites color pie to this day, the global buff.

The most hypocritical thing about it is, 20 other cards currently exist in the game, with the word Crusade or Crusader in their title. Will these cards also get the axe? Only time will tell (though I doubt it).

Playability: What can be said about Crusade that hasn't been said in the past by more qualified people. Pumping up all your white creatures can be an amazing boon in the right deck. It can make a White Knight trade point for point with a Serendib Efreet, Tundra Wolves take out most two drops, and allows Serra to trade with a Shivan Dragon. The best part is it stacks. While many designers complained that they hated it pumping opponents creatures, which was an intended drawback, in my experience it never came up to devastating. As a bonus, it's always fun getting a pump off an opponents Crusade. 5/5

Art: The Old School legal art (outside CFB) is like most of Poole's early work simple. Showing several knights standing triumphant over the victorious battlefield. In the back, a pyre burns in the background. The devil with this small piece is in the details, small things like the knights in formation in the back, the standards, and the fact the 'leader' is the only knight in a red tunic all sell this piece effectively. A neutral color of blue and green behind them compliments the figures well. All and all, the art is effective leaving a mark in small details while effectively showing what it is. 5/5

Flavor: A Crusade is called, which pumps up your creatures, as well as your opponents creatures. Those white aligned fill with fervor, and fight more effectively. Sure flavor in Magic isn't perfect. I'm not sure why a crusade suddenly makes my Camel desire blood, or my Mesa Falcon turn into a god damn bear, yet my Elder Land Wurm still is busy sleeping in. Alas, thing's aren't perfect in M:tG when translating to flavor. 4/5.

Final score 14/15= 4/5. It's honestly an almost perfect card, and I'm glad it exists. It's inclusion in the base set shows that is probably one of the most influential in the game. While blacks identity of global buffs have fallen to the wayside, Crusades legacy stands strong even today, despite the arguably racist and cowardly actions by WotC.

Finally it's impact if it was banned in the format: I honestly don't believe White Weenie could survive. Army of Allah can only get you so far, and the buff this card provides is needed for a deck that still struggles (even more so without the inclusion of Fallen Empires). With this and Jihad theoretically banned, that would leave White Weenie with Angelic Voices as it's only global buff. Yeah, that ones not as good at all.

A New Year, a New Review!

Ah, its strange to think I'm starting on year 4 of Gunnarson's Bag. It's been a crazy year, hasn't it? I've probably done more this year, in terms of Magic: the Gathering then the previous two years combined. Between getting drunk and playing in event after event in March, going to the 1st Birthday of the Desert Twisters, being kicked from the General Population of Old School Magic Discord, getting kicked from Captain (oh that was interesting), being involved in general drama involved with WotC, and missing both Derby's (again!).

I've also gotten some pretty awesome cards, tried my hands at alters (which I enjoyed doing, though the final product is sort of lacking in my opinion), we hit post 100 (Dakkon Blackblade <3), and tackled with unemployment.

Speaking of lacking, this year, despite all this theoretical free time, I only posted 21 entries in the blog, half of the previous two years (42/48 respectfully). At least two of these were short stories, and one was a guest article, so in reality, only 18 entries actually had to do with Magic. Counting the usually blog review in January, and three articles about issues involving the game at large, I'm reduced to a mere 12 deck/card reviews for the entire year. This is unacceptable, and to my fans (all five people) I apologize.

I've decided I'm going to commit to one article a week minimum, with two a month guaranteed to be about Old School/95/Scryings/whatever. I'll probably continue to write my short story The Wayfarer on here, but might move the one not at all inspired by Magic to another blog, if I continue it at all.

Now to the review:

Least Viewed Article (card review): Stone Hands. A musing more then a proper card review, the card was used to poor effect in my Lollipop Guild deck. I did say in a deck with stronger creatures then dwarves (where they would be takes out of bolt range) it would work better. Speaking of, Dwarven Lieutenant only has ten more views with 80 cards.

Most Viewed Article (card review): The Banned 7: Jihad. The Banned 7 went through three cards currently, Jihad, Pradesh Gypsies, and Cleanse, all of which had over 300 views, not bad I'd say.

Least Viewed Article (other): Not counting Homage and References, which is currently unpublished (for reasons I forget) its Pentagrams and Magic, which dealt with the weird, and occasionally hypocritical nature of the Pentagram on Magic cards.

Most Viewed Article (other): By a considerable margin, it was none other then my ambitious project to review every single card in Scryings. It was so popular, I might try it again with Fallen Empires or The Dark.

So what does the next year hold for Gunnarson's Bag? Well I already posted the first week article, about some tricks you can do with Vesuvan Doppelganger. I have a heated opinion piece about content creators demanding to be paid by WotC. I'm almost done with Chapter 2 of the Wayfarer, and I plan on writing a review on the mono blue deck I made for "Choose your own standard" tournament in December. Outside this, I never have a major plan. I'll probably review the References and Homage article I unpublished and maybe republish it.

As for everything else! Happy 2021, and may it be better than last year. 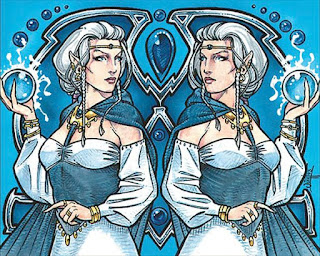 Vesuvan Doppelganger is probably one of the more infamous clone effects in the game. Besides for its wonderful art by Quinton Hoover (best looking card Art in limited in my opinion), it has an amazing amount of versatility, as it's able to switch its form every upkeep. However thanks to this, and the fact it's always blue, their are some amazing and odd tricks that can be done with it.

Since the card is nearly perfect, I won't be doing a proper review on it, as much as a new segment, called Tips and Tricks, which will tell interesting tips that can be done about said cards in game.

When copying a Triskelion/Tetravus, it will come into play with 3 +1/+1 counters. During your upkeep, you can change the card's target (if available), but it will keep the counters.

You can also do this with Clockwork Beast/Avian/Bad Homelands ones, allowing you to a few extra counters during your upkeep!

You can copy a creature that has an issue with untapping, like Leviathan or Colossus of Sardia, allowing in a pinch to swing with an otherwise unusable fatty. Later, it can be switched to another card to untap (albeit that is admittedly slow).

It can work great with Sword of the Ages, allowing you those few extra points of damage to win.

If you copy an animated Factory, it will come into play as a land (not as a 2/2) with that additional ability. Youd be surprised how effective that is. You can also do this for fun with Copy Artifact and Clone.

This also applies to any card that became a creature. Makes interesting plays with the likes of Xenthic Poltergeist and Living Plane. I mean a Library of Alexandria that can become another creature is pretty awesome! (You can do this with Mishra's Groundbreaker you AlIce/96 players).

Speaking of Clone, if you Clone a Doppelganger, he will gain the ability to change every upkeep, but will be a copy of that card (but still be blue).

If you Doppelganger and Doppelganger it will get multiple triggers to change types. Some hilarity can come from this. You can also have Doppelganger target itself to do this. The last target determines its type for the remainder of the turn.

Text change effects still apply even when changing form. Use that as you will.

It always being blue allows it to gain benefits from Sunken City and Tidal Influence.

Doppelganger like all clones copy everything but flavor text.

I hope you enjoyed this little browse into some neat tech you can do with this unique and exciting card.

Posted by Gunnarson's Bag at 11:18 AM No comments: