White creatures always come in three varieties. Small, extremely well costed, aggressive creatures, questionable utility creatures, and finally big "champion" creatures.  The most famous, and arguably most powerful champion in white is Serra Angel, however numerous other creatures exist in the format.
Hand of Justice, Personal Incarnation, Elder Land Wurm, and finally Akron Legionnaire. Hes a long standing personal favorite of mine.
Recently I included him in my deck "offensive white", and while I didn't cast him once, I loved playing him regardless. So how well does he do in our much love limited card pool. 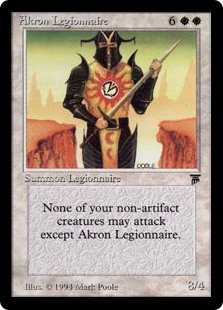 Playability: Sitting at 8 power, Akron Legionnaire is actually the strongest mono-white power in terms of raw power in the format. The four toughness however is well within Psionic Blast range.  Now the advantage to this is, he's white, so there are numerous ways, both global and local, to pump his toughness.  This has the natural flaw of requiring other cards though. In this regard, the GCU made him a Soldier, which gives him a synergy with Icatian Lieutenant. However sitting at 8 mana, he is very expensive. He cost as much as a Elder Dragon, and one mana less than the 9/9 Colossus of Sardia. However he only costs two white, making him somewhat splashable. Finally, he has one of the strangest draw backs in the entire game. I well get to that in Flavor though. As is, I give his playability 3/5. 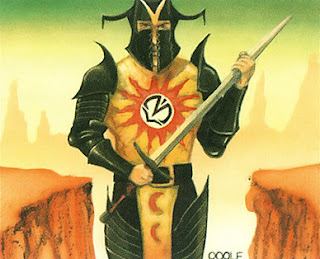 I can't gush enough about Mark Poole's distinct art style in the early 90's. The coloring of his pieces were always great. The coloring on this piece is no different, and allows him to pop. The Legionnaire himself has some pretty awesome, if fairly impractical armor. The Tunic on the piece is particularly awesome. Then the colors of the background. Art is definitely a solid 4/5.
Flavor: Oh boy. Judging from the card itself, it's a mess and a half. Sitting as an 8/4, suggests this Giant is a massive creature, in size and strength. Being stronger then a Elder Dragon isn't that unlikely, and weird P/T on creatures is the trademark of Legends. His draw back is the strangest one of all. Why non-artifact creatures? Does he bring fear upon his appearance? I have a long theory this card was originally Akron Legion, which would they only attack with war machines, and when the art was only one figure, it was changed to Legionnaire. This however, is only a theory, with no proof.
The Legion does appear in the Jedit Ojanen books, but the book was written years later after his last printing, and the Akron Legionnaire's in that book work for Shauku the Endbringer, and have little in common outside the name with its Legends counterpart.
This doesn't help me with the flavor aspect. In reality, the flavor of this card is a hot mess. I'm going to have to give this a 1/5. It's among the strangest white creatures in the game.
Flavor 1/5.
8/15. (Barely) 3/5. His art is amazing, and his 8 power is awesome. He makes my inner timmy cheer, but he's not a great card by any measure. Still, not the worst guy in the format by any definition. 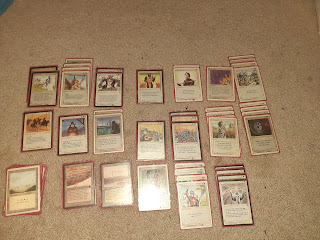 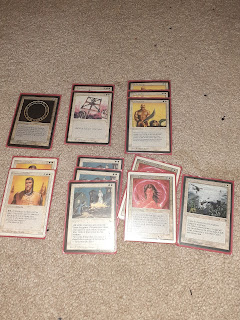 Wizard of the Coast does Airstrip One

"Every record has been destroyed or falsified, every book rewritten, every picture has been repainted, every statue and street building has been renamed, every date has been altered. And the process is continuing day by day and minute by minute. History has stopped. Nothing exists except an endless present in which the Party is always right."-George Orwell, 1984
Historical revisionism has become a major topic in the last decade, in what seems to be every facet of civilization.
It would seem Wizards of the Coast decided to jump on the band wagon and ban 7 cards with a promise of additional cards in the future.

While I made many bets on which cards will be next cards to be banned (I got 5 points on reparations, for the certainty, 10 on Arrest, and  30 on the high bet Mass Calcify), it's not what was banned, but why they were banned.
See there is a bit of a back story here. It started on June 8th when a "content creator" named Zaiem Beg wrote an article called "The Wizards I Know". In the article, Mr. Beg talks about hearsay of WotC being racist. Most of it can attributed to stuff that was already known, WotC is a massive company in a very niche market, and the whole industry largely works on nepotism and favoritism. He however ends the article with a complaint, which has nothing else to do with the article itself, about the card Invoke Prejudice. 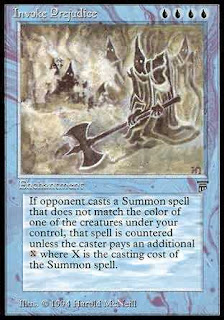 This card was rather obscure for a long time, and was full of awesome trivia. Through pure coincidence the Multiverse ID of this was 1488, its artist, while professional, has some controversial, beliefs, and finally the art itself has been accused of depicting Klansmen (actually inquisitors).
Instead of ignoring this article by a relatively minor content creator, or trying to improve their corporate culture (I understand that easier said then done), they made what has been one of the strangest, and strongest knee jerk reactions MtG has ever seen.
A few days later WotC announced seven cards banned in all formats, as well as their depictions on Gatherer, with the promise of more bans to follow.
These cards are as following:
Crusade
Jihad
Cleanse
Stone-Throwing Devils
Imprison
Pradesh Gypsies
Invoke Prejudice
Now I will give Wizards credit where it is due. At least it banned both Jihad and Crusade equally (I'm not sure how Army of Allah got passed them though), and they finally recognized the power of Pradesh Gypsies. However, they didn't give any reasoning to why these cards were selected. Apparently Stone-throwing Devils is a common derogatory term in Palestine. Gypsies are an real world ethnicity, but outside those, and the obvious one, the rest are truly head scratchers.
Soon several other search engines, including Scryfall, followed suit. Removing the "controversial" pieces of cardboard from their databases. Tcgplayer deleted the cards from their site, as did SCG. However, SCG is, as of this writing, still selling the cards on their ebay store. Not very ally of you SCG.
Speaking of Ebay, people have been reporting auctions of the card, which has resulted in the listings getting deleted, but judging from what I seen, it hasn't been very effective.
However this brings us to Old School. Though I've been banned from High End Magic for some time now, I at least heard they put a ban on the cards being sold in the group, and from what I heard a number of other sale groups as well, with threats of bans.
This has also come up to the Old school community as well. I can not speak for rule set up or community, but asking around has yielded some results. The communities 95/OG Type 2/Scryings have said none of these cards are banned. NEOS has all but basically banned Invoke Prejudice, saying it can only be played if heavily altered. The Northern Paladins said none of the cards are banned (except IP), but asked you to think of the repercussions of putting them in your deck. The big one however, Eternal Central, has said it won't honor the bans, and the cards shall stay as is.
Meanwhile the RC has respected WotC decision and all cards are banned in EDH, which only one of these cards saw regular play. As for Old School, several of these cards are staples. Crusade is a corner stone of whites color identity. One party has even tried making functional reprints with different art and names. While the cards were very pretty, I didn't support it based on principle (but no reason you shouldn't).
Where we come from here I'm unsure. There have been talks that all of McNeill art could be banned. There are many staples in both old school and EDH that he drew, including Sylvan Library, Circle of Protection, and Nether Void. People have also called to ban for Terese Neilson art as well.
Now some people say "oh it's just the bad versions of the cards that are banned". Except that Crusade got a blanket ban, despite three different art for the card existing. If they ban more cards, it will be a blanket ban.
Personally, if just IP was banned, I'd lol, say good riddance, and move on with my life. However, you can't just allow the destruction of history. I personally might not care for Invoke Prejudice, in fact, it's not my style of card, but I'd never want to destroy its history, or demonize some for playing it. The rest however, with possibly the exception of devils, are a stretch. I, obviously, don't support the bannings, and will continue to run them in any deck I see fit.
Finally where should you go? If you want a search that won't buckle, might I recommend EssentialMagic.com. Its interface is admittedly a bit dated, but I have used it for years, and it even has a deck creation tool. As for a group that's safe to sell or buy, might I recommend Old-School MTG finance Discussion & Reserved List Marketplace. It's open and fair.
Sources: https://docs.google.com/document/u/0/d/1RDhVZ4x_Zf1abOpGfEGMI4xtYMA7AghCN5uWIfJRa6c/mobilebasic (Ths Wizards I know)
https://www.eternalcentral.com/on-magics-impure-history/ [announcement on EC].
EssentialMagic.com
https://m.facebook.com/profile.php?id=242129849876187&ref=content_filter
https://www.technicolorsound.net/new-dawn?fbclid=IwAR3GL0jjE6imCTHsFG-93FZt_6U5TXxlvaHm_OOk2sz802bBiAD-lYZND7c
Functional reprint series.
Posted by Gunnarson's Bag at 10:09 PM 2 comments: