Year two in Review: A Retrospective.

Two years! Where does the time go? I don't know, but what a two years it has been. In this year, I've had the honor of participating in the creation of another TCG, which I'm humbled to help with, I got caught up in a angry mob and was greatly embarrassed over it, I moved two hours north of my previous home, which was a family ranch that had successfully been sold, and started restoring a house, and I wrote a total of 43 Articles on the blog, most related to MtG (I believe three are short stories).

Most viewed article (Card Review): Stasis: Magic art piece, with over a 1,000 unique views! It details the history of not only the design of the card, but the piece of art as well. Easily one of the most intensely written and studied articles I've ever done.

It also surpassed Uncle Istvan as my most viewed card review.

Least viewed article (Card Review): Narwhals: Inventors of the Shisk Kabab.More famous for the image attached to it, then the actual post itself. It's only has 81 reviews, actually going lower from the 87 views over Fire Sprites.
It's also less then last years least viewed card review, which is none other then Weakness.

Most Viewed Article (deck review): 5 color legends. A review of my last year Winter Derby deck (I wish I had more time to try Treefolk this time around). The deck did get quiet a bit of fanfare, as being 'ballsy'.

Least Viewed article: Surfing Omegle. A EDH/Brawl deck that was appropriately named White Weenie deck, only got 58 views, several of which was probably from me.

Most Viewed Article (Other): Surprisingly it wasn't a "Tale of two formats", but instead, it was the "An Open Letter to WotC", in which I complained about the year of changes for the tournament scene, and a number of other related incidents around more 'main stream MtG'. It's currently my most viewed, as well as discussed articles, with over 3000 unique views! However, this could be due to the fact it's an article that far exceeded OS Magic and fell into MtG as a whole.

I'm hoping to continue reviewing cards, getting feedback, and of course, improving the game as a whole!

Here to an awesome decade!
Posted by Gunnarson's Bag at 3:48 PM 2 comments:

5 Cards I wish was in Scryings 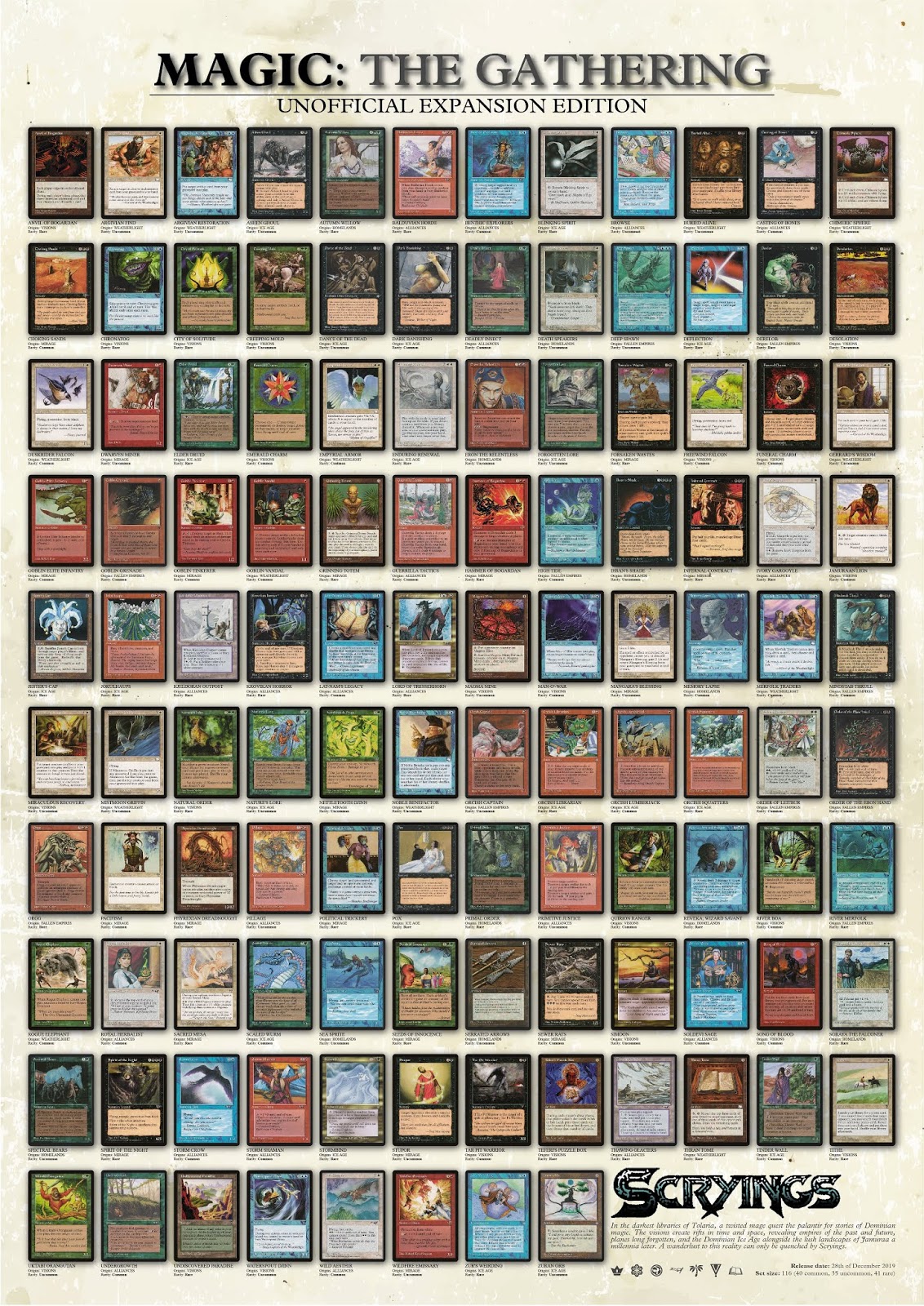 You can't please everyone, and while I'm certainly in that list, and I don't intend to play Scryings much, I will say that without a doubt, Scryings is a fun set none the less. I can understand the thought process that went behind it, nothing too game breaking (so things like Squandered Resources, Necropotence, and Fireblast would be out), nothing past Weatherlight, and it's fully excluding Portal (which technically came out between Visions and Weatherlight), and no mechanics that aren't legal in "old school" which includes Cantrips (and slowtrips), pitch spells, Cumulative Upkeep, Phasing, and Flanking.

With this in mind, their are still numerous cards, both old favorites, and fan favorites alike, that I wish made the cut. Here, I would like to talk about just a few.

While I wish Fallow Earth was around, I understand the threat a card like that could pose. However, when I was Ogre's younger brother of the OG stompy deck didn't make the cut, I was a bit set back. Sure my favorite elephant, and Riverboi was around, and I understand not all the pieces of that deck could be in the set (sorry Harvest Wurm), I still think this guy, the thinking man's stompy creature, should have been included, though looking back, it seems quaint to try and flush out blue mages counterspell mana to prevent two damage.

Very few Magic cards depict romance, and very few Magic cards are good life gain cards. This one is both. I actually had a flare deck at one time, with Vernal Bloom, mana flare, and overabundance, in an attempt to gain life and burn out players with X burn spells. Sure, this one has some bias, but it's strictly better than the amazingly simple Stream of Life.  Plus we got the other "multi-kicker" spell in this set, that is Primitive Justice.

I felt this was the perfect opportunity to throw in one or two more Poison counter related creatures. It was a hard choice between this awesome guy, and Sabretooth Cobra, but settled on the Mosquito, because of it's versatility and it's built in invasive ability.

While I'm on the subject of Poison counters deck....

The Johnny's secret, Fire Whip is suprisingly versatile. Once upon a time, it could be seen (rather poorly) being enchanted to Marsh Vipers and Pit Scorpions, to get around the evasive limitations of those cards. Since neither of them had built in evasion.

You could also, equip this to Nicol Bolas, and during the end of the draw step blowing up hands at instant speed. and speaking of Bolas.

Like many early tournament stories, theres a legend of someone playing this and Pox and turn one to aggressively swing with a turn one Bolas, thus discarding the players hand, and assuring his own victory. Now how true this story is, is debateable, but it's a cool story none the less.

With Pox, and Bolas legal, I'm surprised this one wasn't included. Plus, it can make, since it's instant speed, an awesome combat trick as well.

Ultimately I was disappointed in the lack of my favorite mechanic, banding. While I could go on about all the banders you could include, in my opinion these three are among the bests not currently legal, if we ignore Volunteer Reserves. Banding, the mechanical embodiment of Old School Magic, was cut from the game with Enchant Worlds and Rampage in Weatherlight.

However, I understand why some might not like the mechanic. While this isn't a complete list of card I wish was in Scryings, it's the most notable ones.

Come back to my next article where I will rate every card in Scryings in one sitting.

Until then.
Posted by Gunnarson's Bag at 3:22 PM No comments: