"At a distance, we mistook the sound for a waterfall..."﻿

For those of you not currently in the United States, we've been gripped by a massive heat wave, and to put it bluntly, it sucks. Which came as the inspiration for todays article. While I was going to do something written about Baron Sengir, or about War Mammoth, I ultimately decided that Wall of Heat was the most appropriate decision for this.

Which brings up an interesting question? How do I judge walls? They actually have some unique qualities about them in OS (such as being able to block Basilisk without fear of death), tribal support, and under costed value, with the various infamous drawback of not being able to attack. I was surprised when I realized, despite my general love of them, I never actually reviewed a wall. 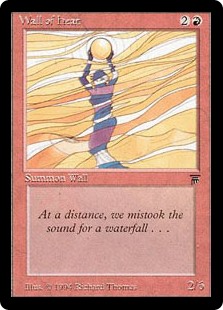 Card: Wall of Heat is a 2/6, for 3. If not for its wall status, it'd be a powerful, but uninteresting vanilla. However, since it's a wall, it losses one point for that drawback. It has 6 toughness for three, which isn't that unique in the color, since Ywden Efreet has the same thing, with an additional point of power, Wall of Stone is tougher, and Wall of Dust, while weaker, comes with a more useful ability. Sure, 6 toughness is pretty good, after all, who wants to fight the heat, but there are just better options. 2/5 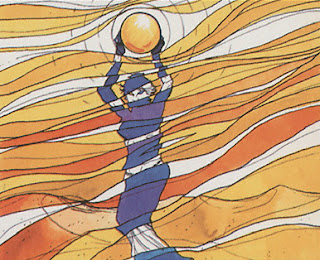 Art: I always loved Richard Thomas wall art. This one is no exception. His images of a wizard (or maybe a planeswalker) standing behind a wall of their creation, are often rather ingenious and fascinating. This one's contains a woman, holding a sun like orb, and radiation heat around her. The constant changes in color, though is the best part of the art is the constant changes in color, particularly where the color's fail to appear, hinting at the appearance of the woman.


Flavor: There are so much strange about the flavor of this. It's power and toughness makes sense, but why doesn't it fly, is it that localized of a spell? Why can some drunk dwarves blow up an abstract. Finally, I never, once, understood the flavor text of the card. I'm giving the flavor on this one 2/5.


There we have it, 7/15, rounded down, makes it a 2/5. Another one from Legends I suppose. I guess, just like the Heat itself, none like Wall of Heat.


Posted by Gunnarson's Bag at 6:48 AM No comments:

The controversial history of mulligans.

Recently I got into a discussion over random variance,  and card games with a colleague of mine. His argument insisted that bad players like variance, because it allows them to occasionally beat good players. He insisted on the fact that the most skill intensive,  least variant formats, tournament attendance is down.

I double backed, saying if the choices are me playing.a deck that I dislike, or not playing, I (like many) have other hobbies outside Magic, and variance is the spice that makes Magic enjoyable.

As many of you know, Magic is introducing a new Mulligan rule "London Mulligan", in an attempt to attack mana screw/flood, as well as making the lay lines more consistent. While many a magic players have shown this to be a terrible idea (who's ready for the next combo winter?), WotC has insisted no such thing will happen, and we will continue to get the amazing tournament experience we crave, with more casting spells, and less mana screw.

However, as everyone knows, the idea of mulligans isn't new, in fact, it's as old as revised edition, and possibly unlimited edition. So if random variance is important,  why create a way to subvert it, well for fun of course, but it should always come with a draw back.

Ante Mulligan: Something I know exists only in theory. Though not an official mulligan rule, there was once a ante rule, where youd shuffle your hand in, draw seven, then ante an additional card. I've personally never seen it, but a few have told me it once existed, and I felt it interesting enough to include. The faults of this rule is obvious,  since it only works with ante, which was always technically optional anyway.

Original Mulligan (Seattle Mulligan/no lands&all lands): One of the most remembered rules of pre-6th. Introduced in Revised edition, the mulligan worked if you had a land of all lands or no lands, you would reveal your hand, shuffle it into your deck, and draw seven new cards. For tournament play, you could only do this once. In my opinion, this is the best rule particularly for 93/94. Library, Maze, and Strip wouldn't be nearly as broken if they forced you to keep a bad hand.  Sure they kick the storage lands in the nad even more, but hey, that's they way the game works sometime.

Paris Mulligan: Originally conceptualized by Pro Tour player Matt Hyra, it was accidentally put into the rules for Pro Tour Paris in 97, and the name stuck. In this, it's simple, you shuffle your hand into your deck, and draw one fewer card. It was formally introduced with Classic 6th edition, and became a major component of the design process. Most famously, a Darksteel card called Serum Powder directly interacted with the mechanic, which is important, remember that.

Vancouver Mulligan: Introduced with the expansion Magic Origins, Vancouver worked similar to the Paris Mulligan, except before you drop lay lines, anyone with a lower hand size then 7 can scry 1. Some interesting rule questions come up with this and Karn liberated, but it's for it's worth, is functional and gets the job

London Mulligan: Tested in Arena and Mtg:O. London Mulligan allows you to draw 7, then pick and choose which cards you wish to put on the bottom of your deck. For example, you are on you second mulligan, you got that Leyline to kill dredge, you simply put two cards on the bottom, thus having a hand of 5.

Magic_Aids has abused this with Serum Powder to consistently win on turn 3. You can look up the video on YouTube.

A similar issue has come up with OS, allowing a player to drop numerous free/cheap spells on turn 1, just to timetwister, guaranteed a 7 card hand regardless.

However the biggest crime of this isn't the fact it hyper powers hate cards and combo players, but instead removes the most important aspect of the game, the variance.

Tonight I was in a booster draft, and while sitting I could overhear another (much experienced) player talking to one wet behind his ears about how mana screw is bullshit. He states only Pokemon and MtG have this problem, and its complete shit, and then he starts listing off other games "that have solved this" like Vanguard and Vs System, and Duel Masters.  I yell at him "the difference is all those games are dead", but he didn't respond.

It's something I truly stand on, Magic reliance on luck, and Garfield's open embrace of it in his design, is Magics biggest gift for its longevity.  It's been the cause for David and Goliath outcomes, amazing comebacks, and bad beat stories.

I later spoke to him while he was lighting a smoke and said "Dont listen to them, mana screw is part of Garfield's mathematical perfection". He laughed, said he almost never gets screwed, because he knows how to build decks, and went on to win first.

I guess in conclusion: Magic needs variance, both in decks being played, and in luck of the draw. If I wanted to play a game where everyone had the same cards, I would play poker, if I want to play a game with a foregone conclusion, and a guaranteed set of rules, Chess certainly has more prestige then MtG.
Posted by Gunnarson's Bag at 9:58 PM 2 comments: