"So when they continued asking him, he lifted up himself, and said unto them, He that is without sin among you, let him first cast a stone at her."- The Bible, KJV John 8:7

Stone-throwing Devils is probably one of the more interesting creatures in old school. A 1/1 first striker in black that was never reprinted, not once. I personally just assumed it was due to it's less then pleasant art and it's off color effect, knights not withstanding. However, when the card was banned, it was if anything perplexing. First people thought it was the obvious bible reference, but numerous other cards with bible references weren't banned, including such tournament staples as Wrath of God and Swords to Plowshares.

It then turned out allegedly the term is used in a derogatory way in a conflict in the Middle East I'm not touching anywhere near this blog. It's my understanding it's also used in 1001 Arabian Nights, and no one at the time of the card being printed was aware of this fact. In this case, it's a tragic but understandable mistake.

So how good are Stone-Throwing Devils? Despite considering it on several occasions, I never once ran them in my mono-black decks, even in aggro. Instead settling on either Initiates of the Ebon Hand, Will-O'-The-Wisps, or skipping the one drop all together to instead dark ritual into Erg Raiders with Unholy Strength with Dark Ritual.

Playability: As mentioned above, a 1/1 for B in black is rather lackluster. With Black Knight, the pump knights, and a number of other good two drops. With Vampire bats and Wisps being 0/1 for B, but one having a pump ability (even if its limited) and the other coming out with regeneration. Not to mention both fly. Initiates are practically required if you're playing EC. However, a first striker for B isn't bad, if not boring, it can be used with Unholy Strength, as frail as that combo is, and its only crime is being lackluster and boring. For this it gets 3/5. It's not a bad card, it's just not good. Art: KMJ never disappoints, and this time is no different. While I originally didn't think much of the art, upon seeing a high resolution of it I'm impressed. Particularly of the pink/purple devils themselves. For beings of such little details, they convey a lot. Mainly the malicious delight they take in throwing the stones with their big smiles. The details around them are nice as well, the palace in the back seems to have moss on it, with some liberal coloring, and beneath the wall is some time of foliage, either trees or grass. The best touch is how, intentional or not Meyer's signature looks like graffiti on the wall beneath them. When I started writing this, I honestly expected to give this piece a two, but upon closer inspection, and writing this review, I realize just how good the piece is. It gets a solid 3/5 for me. 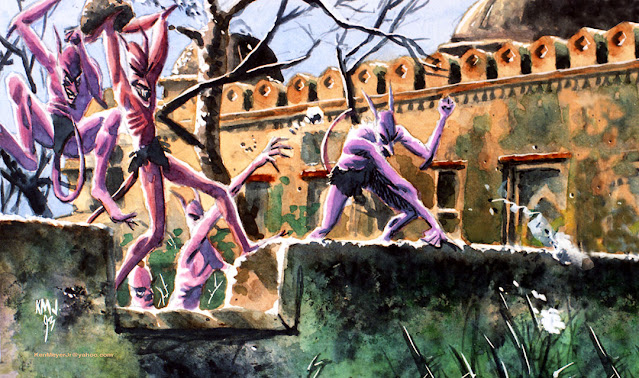 Flavor: Like a lot of early cards, a group of small creatures make up a 1/1. They throw stones, so they have first strike, and they are black, because they are devils. Not a whole lot to go with in that regard. The Flavor Text is admittedly neat, if also a little uninspiring, like something you'd see on modern flavor text. The flavor of the card works, but isn't spectacular. 3/5.

The first time ever, a card gets a perfect average rating. Sure, it's not the best card in the game, but its certainly not the worse. The art works, and is memorable, but isn't super memorable. Its only claim to fame was it being 'banned'. I think that's ironic, giving how little offensive this card is outside of a ill fitting name. Even the impact on OS would be only a little bit of a hickup for mono-black aggro/weenie, particularly formats without Fallen Empires.