Hello, and welcome to Gunnarson's Bag.  A blog dedicated to talking about Magic: the Gathering cards dating between 1993-1997 (and possibly beyond).

Now many of you might be wondering why did I make this blog? After all, I was offered to write articles for Wakwak and other sites, so why do this instead?

Well while I will probably post the concept of decks, and how well they run elsewhere, here I will post musings, idea's, and favorites of cards from my favorite era's of the game.

Now, as an example, I will post the first card that comes to mind, and the card that earned the name of the blog, Axelrod Gunnarson.

Don't worry if you don't remember him, most people don't. 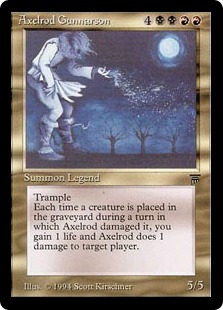 Yes, I know a 5/5 for eight (across two colors) isn't all that impressive, but between the depressing art, the scope and scale of the subject, the bad ass name (I actually imaged some fantasy tier biker when I first read the name in a magazine), and the fairly unique ability, he's always left a chord with me, even if I admit he's not very good.

Now I would have gone w/ his Cousin (and my profile pic) Dakkon Blackblade, but I figured using him would be a bit more unique instead.

I'll be honest, I'm a budget player, and as long as I've played Magic (too long), I have been. It's probably not going to change. Well when you are a budget player, you learn how to play with your handicaps, and I might even argue, might be able to evaluate cards better. Not to be an elitist mind you, but there is some truth to 'baptism by fire'.

Art: How well the aesthetics of the card work. This will focus on the art on the card, and in some cases, the border as well.
1: Doesn't make sense, atrocious, or simply childish art. Not a good piece at all.
2: Unusual choice, but not the worse. Could be better.
3: Although the piece as an art piece has its flaws, it works for the card, and thus gets a passing average.
4: An exceptional piece, leaves a vivid mark on the user. Sometimes may even take advantage of the medium.
5: Truly the best WotC had to offer in the 90's. Easily one of the best pieces in the game. Still recognizable even today among people who weren't alive when the card was fresh.

In the case of our namesake, I'd give him a solid 4. Axelrod being hunched over in the corner of the actual piece is an exceptionally good touch on the art piece. The dark colors and neutral tones also help with this, almost giving the art a 'story book' look to it. Particularly his surroundings which has a great 'less is more, but not too less to it' Finally, there is Axel himself, who is crying while spreading ashes from what I think is a bag (I could be wrong). Obviously the remains of someone he cares about. Then just how big he is, a Giant among giants, those things under him our trees, just to give the scope of his size. (Plus, there's a shot there for the ladies).

Play ability: How playable is the card.

1. Terrible, unnecessary pointless, or over costed and under utilized. Leave to the dust bin of your common box.
2. Just bad. While not utterly terrible, it's effect is either so niche, so pointless, or so difficult, it's just not worth the issue.
3. Your typical utility card. Boring, but gets the job done. Grizzly Bear is probably the greatest example of a 3 playability.
4. Good cards. Most decks are composed of these and 5's. Always good to draw, no matter what point of the game. Even better to draw when needed.
5. The best of the best. Except not much of these due to the nature of the blog.

In this case, Axelrod as said earlier, isn't the most playable guy in the game (or even in Legends). He's a 5/5 for 8 CMC over two colors. I mean he's tied with Lady Orca for the least playable Black/Red legend in Legends (Devilboon at least makes tokens). However, in his defense, he's black, which helps a bit against Terror, as well as being pumped by an opponent's Bad Moon, and that is always worth a point. His ability is also unique, but limited. You'll be lucky to gain a Syphon Soul off of it in 93/94, though I've used the effect to solid use in EDH and other such formats. It should be noted, he's also currently a giant, even though that doesn't help us here.

I'd give him sadly a 2. While I like him, and his ability, it's just too much set up to get use out of.

Flavor: This is how well the car works w/ what it's suppose to do. How well does it 'feel' if you will. Does the card just raise questions, are is it so good, you'll come back for more.

1. The card fails at functioning as intended with the medium.
2. Questionable effects, odd ball rulings, mismatched colors.
3. Boring, but makes sense with how it works. Shows well in cardboard form.
4. What most cards can strive for. Solid, memorable card. particularly cards with drawbacks, and niche spells.
5. A masterpiece in design and function. These cards is what made Magic well magical.

I don't understand why he syphons souls (maybe it has to do with the powder/ash?). I don't understand why something so massive in the art is a 5/5 (only a bit stronger then a 'Beast' under modern guidelines, but is as strong as a Shivan Dragon or a Horde of Demons in the old ones). I do get Trample, but even that is questionable. To further up issues, literally nothing on this Legends legend has ever been written. Nothing on a piece of flavor text, not a short story, not even a comic. He's literally just on this card. For this, I'm given him a 2, but alas, I still love him.

Finally Overall: How well the card works as a unit. By taking the other three scores and getting the average.

In the case of Axelrod. He gets a 2.6, putting him on the subpar, but allowing him to exist not to bad. After all, he got a blogged named after him

Any requests, advice, insight? Please PM on facebook, or send me an email. I will say, this is my first blog ever, and it's a work in progress, so please be kind.