Mana Clash: What could have been.

Mana Clash, is what I like to call a 'game' card, in the sense that it forces a small game within the game of Magic. A sadly rarely used mechanic, it can be an awesome card, or a terrible card, all based on luck.

Now did you know this card was made as a tribute to what was almost the name of the game. It's true, sometime between 91, and when the game came out in 93, the game was tested under the name 'Mana Clash'. Don't believe me?

(I was suppose to have an image of this, but unfortunately Google failed me. If this changes, I'll change this post).

You see, Magic was too generic of a name to copyright, and a few different names got thrown around, including 'Mana Clash'. Even test print cards were made of it. Instead, 'the Gathering' was added instead.

For the sake of posterity, some playtest cards had this background. 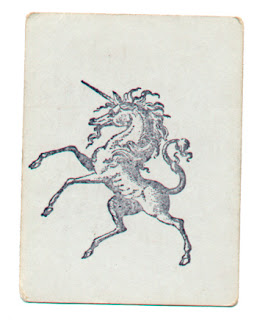 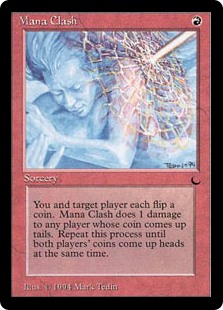 
Mana Clash is the only 1 drop red spell in the format (and the game) that can in theory end the game in one turn. It being worth under a dollar also helps for the budget burn player looking to have some fun in the process.

I'll be honest, on average I might do a total of 6 damage with this card divided randomly between both players, but my record is 19 damage (25 if you count me). I've also had games were I did 0 damage with it. However, when playing with red, it's possible you will get burned.

Art: Honestly, I never liked this art. Yes, Mr. Tedin is a great artist, but that doesn't mean I have to like all his work. In fact (in fear of getting boo'd by certain purists) I enjoy the post-8th art better.

However, the art of the Dark version functions on what it's doing, burning an unfortunate Planeswalker. So I'll give it a 3.

Playability: This card is a fairly polarizing card. You either love it, or you hate it, with little middle ground to be found. It's hard to bad mouth a one drop that can do 5 damage on turn 1, but it's risky to play a burn spell that can hurt  you more then the opponent, do literally nothing, or be less useful then a shock.

However, interactions like this are also very entertaining, and the occasional spike you might meet that gets salty over it is just the icing on the cake. Mmm sweet sweet salty icing.

So due to it's unique nature, and it's entertainment factor, I will (much like casting this spell) throw caution into the wind, and give this a generous 4 (though I'll admit, in reality it should probably be a 3).


Personally, I've mused is it worth building in 93/94. I have one in my twins 'Winter Derby' deck, and I'm waiting for feedback on how well it is doing, but in our Planechase game last night it went 0 (Infinite Mana plus Planechase is a bad idea btw).


Flavor: the Flavor of this card is a bit of a strange one, since it actually doesn't work with lands or mana. However, the idea is you're causing energy to be unstable, and there is a chance it might burn you, or not, in an unpredictable manner. It's a stretch, I know, but that is what I got for it.

Nine, divided by 3, equals 3. An average, yet memorable card, worthy of some consideration into burn decks. Particularly those who take a 'fun first' approach, as well as those who enjoy the possibility of generating salt.

For the sake of posterity, here is the third art, my least favorite piece.

(Writers note: I'm well aware there is a large number of combo's with this card, including Krark's Thumb, and no it doesn't work with Chance Encounter anymore, though that would be awesome. I'm trying to keep this strictly to 93/94).