It's the early 90's, the Cure is still in public memory, Sandman is one of the best selling comics in the game, and MTV is at it's all time height in popularity. Gaming and the Goth scene had some strange overlap in the early 90's. Thanks to the game of "Vampire: The Masquerade" by White Wolf, gamers and goths had a great deal of common ground. (Not to mention it's share in fringe culture). An article by John Tynes "Death to the minotaur"  had this passage:

"In particular, the goth subculture of Seattle was strongly represented, with numerous employees dressed in black and various bits of metal glinting in their clothes or skin. The crossover between the goth scene and the role-playing geek community was strong thanks to Vampire: The Masquerade, a hugely successful game whose premise was ripped bleeding from the novels of Anne Rice. The goths of Wizards had the cheerful, morbid humor endemic to their society, along with a dramatically heightened sense of outrage to perceived slights or efforts to sell out. One employee, Rhias, wore an impressive variety of black corsets to work every day and kept a mummified dead cat nailed to the wall of her apartment."

With this, it's easy to see the parallels between this, particularly in Seattle, which was also the home of Grunge (the Seattle Sound).

Earlier this week, I posted an old magazine Ad, for the expansion of Fallen Empires. No sooner then a day, someone posted how this, and the Dark were showing Magic willing to take a more Gothic approach, and how important this was too teens like him, showing they were willing to release a mature product. It instantly reminded me of the above mentioned article. However, it also got me thinking about the sets. Fallen Empires didn't really have much of a Goth feel, sure Armor Thrull certainly had a classical gothic feel, with it's arched sewers. However, the Dark, certainly did, but three cards in particular stood out.

The set, which was both designed and directed by Jesper Myrfors, was as much an art piece as it was an expansion. Featuring numerous classical references, real world quotes, cards with powerful downsizes, mature themes, and even the frames, with cards in the original US print being darker then other printed set, and the colors white brightened and dark boldened, given the cards a very unique feel, even among it's contemporaries. It's in my hands down opinion the most aesthetically pleasing expansion in the entire game.

However, I'm here to talk about goth's, and it's influence in early MtG, particularly the Dark. Three cards art shows this better then anything else, all drawn by the above mentioned artist, Elves of Deep Shadow, Sisters of the Flame, and The Fallen. Myrfors was known for his experimental art, and these three cards take a Photo realistic approach. 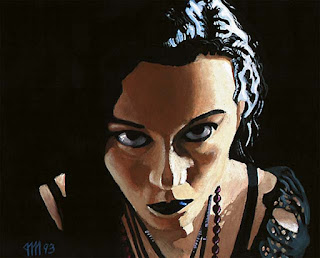 Elves of Deep Shadow: Here we see the original MtG hottie (Serra isn't that hot, lets be honest), the queen of Type 0 Negative, in all it's glory. I won't say too much on this, since I plan on evaluating the card at a later time. Instead, this art piece is one of my favorites, and when it was reprinted in Ravnica, fan demand was so high for this art it got a reprint as an FNM promo. (It also got a reprint on MTGO with the art).

The model for the art was a woman named Amber, who was (as of 2008) the leader singer of a Seattle based band Varnish. According to legend, this was an accurate depiction of what she looked like in 1993, but others claim it takes some liberties.

"They are aberrations who have turned on everything we hold sacred. Let them be cast out."--Ailheen, Speaker of the Council

Almost nothing exists on this one, but it looks like it could be on a metal cover. Any 90's metal band would love this to don it's CD Jewel covers. It's art isn't as good as the other two, but it fits the bill all the same. Universal light source, a figure looking at the player, and a creepy overview of the art itself.

In the lore a 'Fallen' was a wizard who died from mana burn, burning out it's soul, and replacing it w/ an entity of malice. It would have intellect, and even magical abilities, but no soul. In the GCU it became a zombie, allowing it to follow it's master through the swamps.

"Magic often masters those who cannot master it." 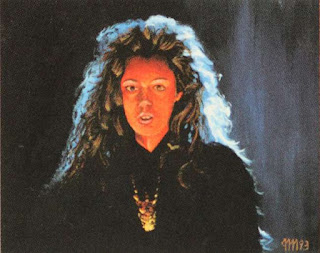 This piece literally looks like it walked out of early 90's MTV (People have said that it reminds them of the music video Never by Heart). It's also probably his most impressive piece, with two light sources, a glow from the moon above, and a glow from the fire below. It's makes an impressive impression on the card stock. Here is an example of The Dark hue frame btw:


While this card is just getting an average of 2/5 (I might due a review on this). It's still an amazing piece, even if I can honestly say I've never run it in a deck.


"We are many wicks sharing a common tallow; we feed the skies with the ashes of our prey."

So I hope you enjoyed my review on Magic: the Gathering and it's early Goth phase. If you are interested in reading the first hand account of Wizards of the Coast in it's early days, it can be found here https://www.salon.com/2001/03/23/wizards/.