What does it mean to be a Warrior?

"This card is more flavorful then every card in Kamigawa block combined"
--Iandustrial, Gatherer, 4,20,2009


What it means to be a warrior is something that stretches amongst all warrior cultures across the world and across time. From the Hittites, to the Marine, from the Channel of England and France down to the orient of Japan, every culture that has had a warrior culture or caste has asked this question. Many have come up w/ different answers, but one that stays true is the ideal of putting yourself at the best of human ability. Virtues of the culture are idealized (if not realistically practical), and are remembered, even when the less then savory facts aren't. Everything from the naked Zulu, half naked Spartan, to the heavy armored knight, to the technologically advanced Marine and SEAL, these ideals are championed in an attempt to separate the Warrior from the other castes of society.

Naturally, like other philosophical questions, this ended up portrayed on an early Magic card. It's a simple, usually overlooked Magic card, but like many of the era leaves a profound mark beyond it's play ability (outside Shandalar of course). 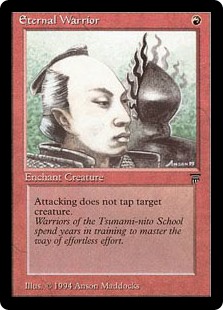 Art: The art shows what can be best described as a classical cinematic depiction of a Samurai warrior. Anson, who is famous for his horrific horror artwork, manages to show his versatility with this. Particularly in the detail of the samurai's uniform and the light source. The light source being something in the viewers direction (we will say the sun). In this, we see the light reflect off both the samurai's slicked back hair, and the well polished statue. The statue isn't of any character or symbol in particular, but it feels so right. The samurai makes no mind to it, as if it's part of his everyday life. Behind himis a simple green wall or bush, depending on your perspective and opinion, it fades into the light source, but a focused eye can see small details showing it didn't disappear.

The best part of this is how realistic the samurai looks, his eyes steady, his cowl humorless. He isn't exaggerated like some of the art of Kamigawa, nor is he done in a historically accurate style (like Tetsou Umezawa). Instead we are giving a simple but evocative picture of a samurai standing, whether it be on guard, in front of another samurai, or in mid stroll, is unknown and irrelevant.

Ability: It's strange that vigilance was once stretched across the color pie. In today's rigid design, It's a white mechanic, with it occasionally appearing in green. It does appear on a few blue cards, and many multicolored cards, but almost all those blue cards require white (The last one not being Serra Sphinx and Auramancers Guise back in Planar Chaos). However, it's across the color pie, and a few are red, including Axelrod Gunnarson, Windseeker Centaur, and card posted above! Green had Rabid Wombat, and even black got it's only mono-black creature in the form of Ghost Hounds.

It's strange to imagine a world were 'Attacking doesn't cause to tap' would be shared between white and red, but in a way, it almost happened. This card's plabaility is hurt like many, due to being an aura, however, it's effect even if only used once, can be pretty damn amazing, because attacking without needing to tap is an amazing feature to have. It allows you to cover your bases. I will rate this how I rate many aura's, with the idea that you treat is like a sorcery speed combat trick, that simply gets better if it can last longer. While it doesn't do much, it does what is needed, and gets it done.

3/5 on playability, even if it only works once.

Flavor: Now here is the philosophical point of the post.Why is making your creature a warrior allowing it to attack and block? Is it because it now has proper training? Does it make your creature faster, stronger? Is your creature just simply more dedicated to the cause? The idea that a warrior must be more vigilant then others around him, to be more then good, be exceptional, works extremely well with this. It's easy to know why Serra Angel, the Falcon, and Yotian Soldier have vigilance (the two fly, the last one is a robot that can move unusually quick). It's not so easy for other creatures, I mean, making your Djinn a warrior isn't keeping it from smacking you in the face, nor does making your raiders a warrior ever make them stronger. Maybe instead, you are imbuing them with the idea that they are stronger, and they try harder? I was actually disappointed this didn't get updated text and new art in Champions of Kamigawa (we got a white version called Vigilance instead).

Either way it's flavor gets a solid 4/5.