Lich: What's the price of immortality?

"I will go to any length to achieve my goal. Eternal life is worth any sacrifice."
—Zur the Enchanter

The quest for Immortality has plagued man for as long as man could think of self. History is littered with stories of people pursuing it in vain, from Emperor Chin, to the Pharoahs of Egypt, to Ponce de Leon, to the transhumanist of modern times, people have pursued some attempt at immortality for as long as we've known the self. Even Christianity, Judaism, and Catholicism, with it's emphasis as a death cult of sorts, promises immortality after the end of days.

However, Immortality is either too impossible to reach, or becomes a chore. Immortality is often shown to be a chore of sorts, a punishment even. People live to watch even there most loved ones die, the world around them change without them able to keep up. One article in 'Weird USA' (a website published by the gentlemen who publish Weird New Jersey) claims he met a man who said the Fountain of Youth in Florida was discovered by  a secret society sometime in the 1800's, and extreme measures have been made to keep it hidden. He also showed a list, with a number of American folk heroes on it, some who died at extreme ages, but not from disease, nor hunger, or age. Whether this is true or not, can you imagine how strange it must be to live so long, to realize that time suddenly has no consequence? I'm almost 30 years old, and I can barely understand the world in these unusual times, can you imagine someone 130?

Still this perspective never kept anyone from trying, whether it be through alchemy and science, philosophical thought, great quests for mystical items, demonic deals, or technology, some individuals will always long to live forever, no matter what the cost. Which is where we come to today's card.


"A lich was a wizard who wretched free his soul, for to keep safe in phylacrity, forsaken all life for immortality, plus immunity to lightning is cool!"---Dan, the Bard. Procrastinating Demi-Lich,

A lich is an Old English word roughly translating into 'Corpse'. Given it's archaic nature, the term lich was a common term for any animated corpse, and even skeletal animation, in many early fantasy books and short stories. The idea of a Lich being the dead remains of an animated wizard who cheated death first appears in the story "Skull-Face" a swords and sorcery story by author Robert. E. Howard, as well as number of short stories by Clark Ashton Smith. Another early passage of a sentient raised corpse appears in the short story ''The Death of Halpin Frayser" by Ambrose Bierce.

"For by death is wrought greater change than hath been shown. Whereas in general the spirit that removed cometh back upon occasion, and is sometimes seen of those in flesh (appearing in the form of the body it bore) yet it hath happened that the veritable body without the spirit hath walked. And it is attested of those encountering who have lived to speak thereon that a lich so raised up hath no natural affection, nor remembrance thereof, but only hate. Also, it is known that some spirits which in life were benign become by death evil altogether."--Ambrose Bierce, The Death of Halpin Frayser, 1891.

However, the popularity of Lich's in popular culture is thanks to it's portrayal in Dungeon's and Dragon's, in which a Lich was an epic villain, often commanding entire armies, and scheming over the course of many centuries.  This served the basis for base set card Lich. After all, even a planeswalker, in all his might and splendor is ultimately mortal. 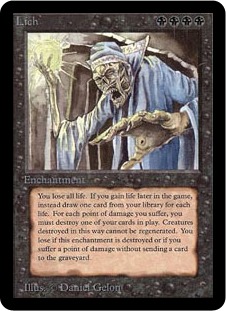 Art: The art, despite the bad quality, shows exactly what it says on the tin. The Lich in the art is seen with holes in it's flesh, barely being held together by dark magics. A stone engraving is in the back, and a spell being casted in it's hand, which serves at the only light source in the piece. Some minor details can give the robe an age'd effect, but alas it's a simple portrait. I like Gelon, but this one only get's a 3/5 from me. It works with the source material, and it's gets the message across, but it's not the first image anyone is going to remember.

Play ability: Lich is one of the most controversial cards in the game. Costing 4 black, it's the definition of not splashable, and it's most severe drawback, when it's destroyed you die, is enough to make most Planeswalkers put it down as quickly as they picked it up. It also has a drawback of turning your cards (not permanents mind you) into your life, forcing you to constantly sacrifice your resources to stay alive. You also can't pay life fore effects, since your life total is at a constant state of 0. It's boon's however, are incredibly powerful. Whenever you'd gain life, you instead will draw that many cards. This turns Healing Salve into an Ancestral Recall (I'll let that sink in), an Alabaster Potion into an instant speed Braingeyser. El-Hajjah now gains you a life everytime he deals damage (at a minimum), Charms now cantrip, Drain Life becomes stupid powerful, and even Fountain of Youth reads "2, T: Draw a card". Further more, it can realistically buy you a turn or two to draw an answer for the game, since you don't need to worry about conventional damage. Further more, it's uneffected by life loss, so any effect that forces you to lose life, forces you to lose none (Personal Incarnation anyone?).  Plus this is an instant win with Mirror Universe (and unusually flavoristic as well).

In reality, only a few cards can destroy it:

-Tranquility (the only well played Green enchantment removal)
-Disenchant (Yes, this card makes it extremely dangerous to have, I admit)
-Disk (Not as threatening, but very real).

A few other examples that fall into fringe territory include Northern Paladin (which is badass in it's own right) and Boomerang (Very much so this).

Now, like many classic black spells, it offers great power at a terrifying price, but if you can harness that power, you can be nearly invincible. 3/5.

Flavor: Like almost all Alpha enchantments, this is where the card shines. It's both amazing and sad this NEVER got a reprint, but I suppose that is part of the flavor itself. After all, only the most dedicated would hunt down the needed path to even find a spell needed. The drawback refers to enchantment as the Phylacria itself, and if it goes so do you. In the current rules of the game, you'd die as a state based effect before that trigger resolves, and that is a relic from the pre-6th edition rules where you'd normally not die until the end of the phase. It's life=draw is a strange argument, but I'd suggest it's the idea that you accumulate knowledge in some form. The draw back can be the same, as you take damage, people destroy your items, hoping each one is a phylacria, however, that one is stretching it a bit.

I'll give the flavor a 5/5, if for nothing else, the meta idea that it's impossible to find.

Note: Several cards have copied and improved on this through out the years, but eventually the idea of you becoming a Lich was scrapped so creatures could be Lich's instead.

More Note: One of my favorite decks of all time was a deck where I'd use Lich with Form of the Dragon to become a Draco-Lich, in it every end step I drew 5 cards, and I couldn't be attacked by non-fliers. It was pretty dope tbh. 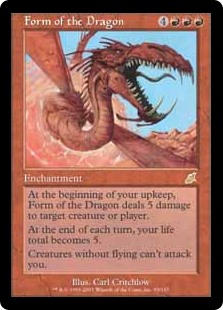