My MVP's of the Winter Derby: Xenic Poltergeist.

The Winter Derby was an event that happened over the course of December and into January. Using Sweden Ban/Restricted list, the tournament had 7 rounds before a top 8 cut. I originally going to run a red/blue burn control build, a classic if you will.

Instead, I was forced to go mono black control, and it didn't do well. Among my seven opponents included a Land's Edge deck, two burn-control builds, and three rocket launched/infinite mana decks. I have however learned some good things about mono-black, and the format as a whole.

One card in there proved to be more valuable then I'd ever given it credit for before hand. No it's not the Gate (which was useless), nor was it Nightmare (who was the win condition). it was small throw away card I put in the deck as a budget option.

That's right Xenic Poltergeist proved to be extremely useful in the format, and for my deck. Often under looked in many cases until it was too late. 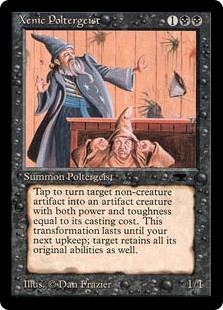 Mono-black has few answers to artifacts, and I wanted something that I could get away with throwing in the main deck. Originally I put him in, as a way to kill Moxes. After all, it breaks jewelry. The other benefits came as I actually played it for the first time ever in any deck.

First it had amazing synergy w/ Oubliette, allowing me to animate a pesky artifact (say a Howling Mine or Winter Orb), and remove it from the game. It could also trade another artifact in a field wipe (not uncommon when I played Nightmare), turn my discs into 4/4's, give basalt monolith summoning sickness, and block if needed.

I actually realized despite the lack of Icy, I ran some Royal Assassins because of the number of artifacts he could have killed w/ this guy would be spicy.

However, hindsight is 20/20, and I almost wish I didn't run the Disc along side him and oubliette, because that created some difficult situations.

I'll be posting other MVP's over the week, and I hope you enjoy them.
Posted by Gunnarson's Bag at 1:16 PM